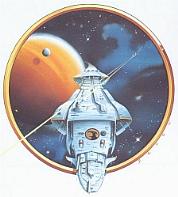 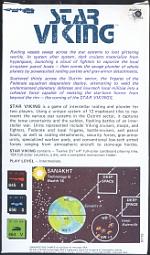 Raiding vessels sweep across the star systems to loot glittering worlds. In system after system, dark cruisers materialize from hyperspace, launching a cloud of fighters to vaporize the local in-system patrol boats -- then comes the savage plunder of whole planets by powersuited raiding parties and grav-armor detachments.

Scattered thinly across the Outrim sector, the frigates of the Federate squadron desperately deploy, attempting to weld the undermanned planetary defenses and low-tech local militias into a cohesive force capable of resisting the star-born horror from beyond the rim -- the coming of the STAR VIKINGS.

STAR VIKING is a game of interstellar raiding and plunder for two players. Using a unique system of 12 mapboard tiles to represent the various star systems in the Outrim sector, it captures the tense uncertainty and the sudden, flashing battles of an interstellar war. Units represented include Viking cruisers, sloops, and fighters. Federate and local frigates, battle-cruisers, and patrol boats, as well as raiding detachments, security forces, grav-armor units, specialized warfare pods, and conventional low-tech armed forces ranging from atmospheric aircraft to stone-age hordes.

"Star Viking is a well conceived and attractive game. The situation is interesting."
- Tony Watson in Dragon #57.

"I give Star Viking a qualified recommendation ... you may want to rewrite a lot
of the rules to suit yourself." - Steve Jackson in The Space Gamer #46.

"The ratio of cost to the hours of enjoyment I have already had with this game is better than
most of my other games." - Ken McMillen in Campaign #107.

"Although the title and concept may bring back memories of an H. Beam Piper novel, a re-reading of Piper will reveal that Star Viking is quite different." - Arnold Hendrick in The Space Gamer #49.