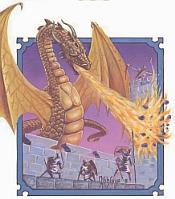 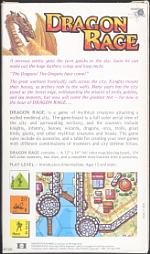 A nervous sentry spies the twin specks in the sky. Soon he can make out the huge leathery wings and long necks.

The great warhorn frantically calls across the city. Knights mount their horses, as archers rush to the walls. Many years has the city stood at the forest edge, withstanding the attacks of trolls, goblins, and sea serpents, but now will come the greatest test - for now is the hour of DRAGON RAGE. . .

DRAGON RAGE is a game of mythical creatures attacking a walled medieval city. The game-board is a full color aerial view of the city and surrounding territory, and the counters include knights, infantry, heroes, wizards, dragons, ores, trolls, great birds, giants, and other mythical creatures and beasts. The game rules include six scenarios, and a table for creating your own games with different combinations of monsters and city defense forces.

"A deceptively simple game system that provides exciting play and a realistic feel." - Matthew Costello in The Space Gamer #63.