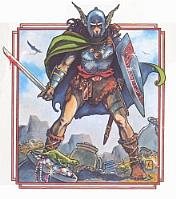 BARBARIAN PRINCE
A Game of Heroic Combat in a Forgotten Age of Barbarism and Sorcery
© 1981, © Reaper Miniatures 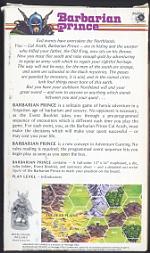 Evil events have overtaken the Northlands. You -- Cal Arath, Barbarian Prince -- are in hiding and the usurper who killed your father, the Old King, now sits on his throne. Now you must flee south and raise enough gold by adventuring to equip an army with which to regain your rightful heritage. The way will not be easy, for the men of the south are strange, and some are schooled in the black mysteries. The passes are guarded by monsters, it is said, and in the ruined cities lurk foul things never born of this earth. But you have your stubborn Northland will and your great sword -- and woe to anyone or anything which stands between you and your quest . . .

BARBARIAN PRINCE is a solitaire game of heroic adventure in a forgotten age of barbarism and sorcery. No opponent is necessary as the Event Booklet takes you through a pre-programmed sequence of encounters which is different each time you play the game. For each event, you, as the Barbarian Prince Cal Arath, must make the decisions which will make your quest successful -- or may cost you your life.

BARBARIAN PRINCE is a new concept in Adventure Gaming. No rules reading is required; the programmed event sequence lets you begin play as soon as you open the box.

BARBARIAN PRINCE contains -- A full-color 12"x 14" mapboard, a die, rules folder, Event Booklet, and summary sheet -- and a detailed cast metal figure of the Barbarian Prince to mark your position on the board.

"The amount of detail is amazing, the replay value impressive, the rules systems staggeringly smart."
- Rick Swan in Wargamer Vol. 2, #19.

"Arnold's rules are so well written that one can begin play literally within two minutes
of opening the box." - David J. Ritchie in Strategy & Tactics #88.

"Each time I play ... things are always different. What's more, I haven't won a game yet."
- Matthew Costello in Gameplay #4.

"Twenty-three games at this bloody thing and I've only managed to win SIX!"
- Bill Watkins in Nexus #1.

"In thirty odd attempts I have not met the victory conditions ... a colorful and absorbing game."
- Bill Skirrow in White Dwarf #29.

"Barbarian Prince is not advertised as a super difficult game, but it is very difficult to win."
- Arnold Hendrick in The Space Gamer #47.

Download ZIP of all recommended game files
* The recommended file downloads are marked with an asterisk *
Thanks to Ron Shirtz, we now have a one-piece map scan for large format printers - download the jpeg below!