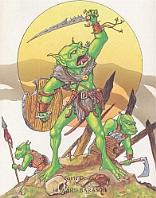 GOBLIN
A Fantasy Game of Raiding and Plunder
© 1982, © Reaper Miniatures

The Goblin King pondered. His goblins were restless. The recent raids had cost lives and produced little plunder, and now there was talk in the caves of installing a new King.

The fortified Monastery! There was plunder aplenty there, but since the last raid, the countryside had been crawling with the human Baron's mounted troops. In a week they would be gone, but in a week, he might no longer be King . . .

And so the gibbering hordes once again streamed from their mountain caves, and there rang once more through the valley the alarm feared by all the human inhabitants, the dreaded cry of "Goblin!"

GOBLIN is a fantasy game of raiding and plunder for two players. Each player takes a turn at playing the Goblin King, leading raiders into the peaceful valley, pillaging and burning. The other player maneuvers the farmers and the Baron's troops in a desperate attempt to stave off the raids. The player who amasses the greatest amount of plunder as Goblin King, before being killed in battle or deposed by his own goblins, is the winner. Goblin is a light-hearted, free-wheeling game with surprisingly subtle strategy.

"The type of situation portrayed sets this game apart from the run-of-the-mill battle game.
It is worth looking into." - Steve List in Fantasy Gamer #2.

Download ZIP of all recommended game files
* The recommended file downloads are marked with an asterisk *
Thanks to Ron Shirtz, we now have a "remastered" counter sheet - download the jpeg below!