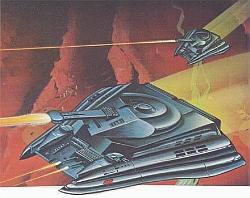 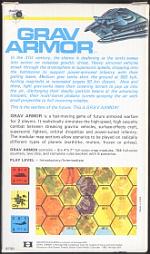 In the 31st century, the silence is deafening as the tanks sweep into action on noiseless gravitic drives. Heavy armored vehicles streak through the stratosphere at supersonic speeds, dropping into the battlezone to support power-armored infantry with their gatling lasers. Medium grav tanks skim the ground at 500 kph, hurling mag-bolts at concealed targets 50 km distant. Here and there, light grav-tanks leave their covering terrain to pop up into the air, discharging their deadly particle beams at the advancing troopers, their multi-barrel phalanx turrets spraying the air with small projectiles to foil incoming missiles.

This is the warfare of the future. This is GRAV ARMOR!

"Grav Armor is not a particularly innovative game, but it is certainly solid, well thought out,
and quite playable." - Tony Watson in Dragon #73.

"Despite these glitches, the game works, and it works well." - John Rankin in The Space Gamer #55.

"Grav Armor acquired the nickname of 'PanzerBlitz goes to the future'."
- Arnold Hendrick in The Space Gamer #55.

Download ZIP of all recommended game files
* The recommended file downloads are marked with an asterisk *
(Except for the scenarios, on pages 14 to 22 of the rules.)
Thanks to Ron Shirtz, we now have a "remastered" counter sheet - download the jpeg below!
Thanks to Markus Stumptner for the scenario specific maps!