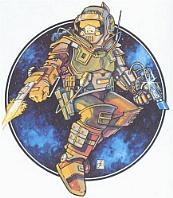 OUTPOST GAMMA
A Game of Man-to-Man Combat on a Colonial World of the Far Future
© 1981, © Reaper Miniatures 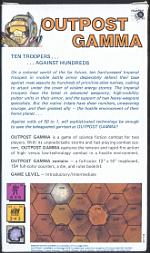 On a colonial world of the far future, ten hard-pressed Imperial troopers in mobile battle armor desperately defend their base against mass assaults by hundreds of primitive alien natives, rushing to attack under the cover of violent energy storms. The imperial troopers have the latest in advanced weaponry, high-mobility pulsor units in their armor, and the support of two heavy-weapons specialists. But the native Irdans have sheer numbers, unwavering courage, and their greatest ally -- the hostile environment of their home planet . . .

Against odds of 50 to 1, will sophisticated technology be enough to save the beleaguered garrison at OUTPOST GAMMA?

OUTPOST GAMMA is a game of science fiction combat for two players. With its unpredictable storms and fast-playing combat system, OUTPOST GAMMA captures the tension and rapid-fire action of high versus low-technology combat in a hostile environment.

"I recommend Outpost Gamma without reservations . . . you'll get far more than your money's worth."
- Bruce F. Webster in The Space Gamer #44.

"These first four releases from Dwarfstar Games are definitely above average. I think, however, that Outpost Gamma is the least interesting of the four." - Kevin Pollock in Campaign #106.